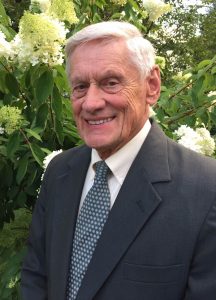 The National Football Foundation & College Hall of Fame (NFF) has recognized Jack Dawson '52 as one of the five recipients of the 2016 Chapter Leadership Awards.  Mr. Dawson

The NFF described Mr. Dawson contributions to football in Maine:

For more than 50 years, Jack Dawson has been devoted to the advancement of the game of football in Maine.

After graduating from Cheverus, Dawson received his bachelor’s and master’s degrees from Boston College while playing football under College Football Hall of Fame player-turned-coach Mike Holovak. He served as the head football coach at Cheverus and Westbrook high schools for 20 years and later as an ECAC official for 10. His book, Football’s Backbone Defense, received national attention for its scheme to stop the wishbone offense.

A founding member of the NFF State of Maine Chapter in 1988, Dawson has served as the emcee for the chapter’s awards dinner for 29 years, and he is a member of the chapter committee. Dawson has been the chair and emcee of the Fitzpatrick Trophy Dinner for 45 years. For his service, he received the chapter’s Distinguished American Award in 2007. (read the full profile here).

Mr. Dawson will be honored during the NFF’s Chapter Awards Luncheon, presented by Under Armour, on Tuesday, Dec. 6, at the Waldorf Astoria in New York City.

The Chapter Leadership Awards, recognize five individuals, one from each region of the country, for their commitment, generosity and leadership at the local level in fulfilling the NFF’s mission of Building Leaders Through Football.

Well done, Jack! Congratulations...have a Waldorf salad while your there.

Kathy Hansen says:
Congratulations! It has always been a pleasure to work with such an outstanding person. You deserve all the accolades and more!
Wally Maroon says:
Mr. Dawson, You are an inspiration to all of your former students!! Tuna