More than 100 Cheverus students, parents, faculty and staff gathered after our Thanksgiving Interfaith Service to finish assembling and delivering the ingredients for more than 500 complate Thanksgiving dinners to families in the Greater Portland area today.

The school community celebrated a diversity of faith traditions during the annual interfaith service. Rabbi Laura Boenisch led the call to worship and, with two Cheverus students, read from the Torah and then talked about the Torah -- what the passage meant, how a Torah is made, and how Star Trek is connected to Judaism (hint: "Live long and prosper."). 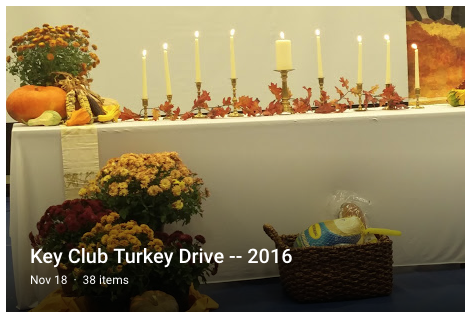 Several students recited prayers from representing Jewish, Catholic, Muslim, Episcopal, Buddhist, Greek Orthodox, Unitarian Universalist, and Congregationalist faith traditions.  Students from the Key Club filled a basket with bread, milk, vegetables, stuffing, potatoes, and a turkey to represent the meals they would deliver after the service.

Key Club President Cassidy McCusker '17 reported that the club exceeded its goal in food donations -- including generous donations of bread and milk from Oakhurst and Amato's -- and would be able to provide Thanksgiving baskets to many of the families on the waiting list.

Cassidy noted that Maine ranks first in New England for food insecurity: one in four children in Maine don't have sufficient food. "Thirty-five percent of Maine's food insecure population makes too much to qualify for public assistance, meaning they must rely on the charity food assistance network.

Congratulations to the Key Club and their advisors Mrs. Connick and Ms. Sullivan for a job well done and thanks to all who donated food, time and effort to this endeavor!

Nice job Cheverus. The world needs more young men and ladies like you.