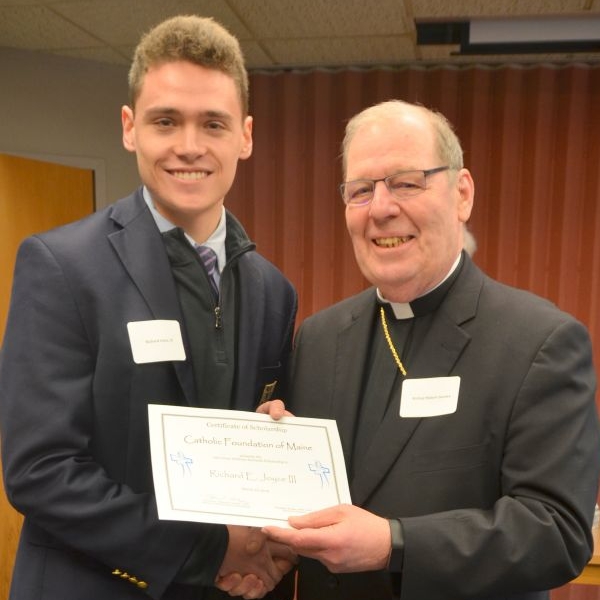 Congratulations to Richard Joyce, a senior, and Vanessa Bussiere, a senior at Saint Dominic Academy in Auburn, who are the recipients of the 2019 Lila Grace Sullivan Amirault Scholarships. The awards were presented by Bishop Robert P. Deeley on Friday, March 22, in Portland.

The scholarship fund, which helps Maine Catholic high school students with college tuition costs, was established in 2013 by the late Patrick Amirault, in memory of his wife. Amirault, who grew up as one of nine children in a poor family in Malden, Mass., created the fund to show his appreciation for the care and quality education he received at a Catholic school there. To be eligible for the scholarship, students must be accepted at an accredited college or university and must plan to work while attending college. Each recipient will receive $4,000.

“His generosity makes it a little bit easier for you to get a college education,” the bishop told the two winners, their families, and school officials at the presentation. “We’re very grateful for Mr. Amirault, and it reminds us of the importance of that kind of generosity as we move forward through life.”

Richard hopes to attend Boston College, his “dream school” where he has been accepted and where he would like to major in business management. He is an “A” student, a member of student government and the Cheverus Key Club, team captain of the basketball and golf teams, and president of the Spanish Club.

“To me, work ethic means always giving 100% in everything I do. I pride myself in putting my best effort into everything,” said Richard. “However, if that effort is not rooted in making the world a better place and is solely rooted in personal growth, it is not a true work ethic.”

And to be sure, Richard has already made the world a better place. Despite his commitment to academics, athletic endeavors, and extracurricular activities, Richard still finds time to volunteer for Special Olympics of Maine and STRIVE, where he works with young adults with developmental disabilities, something he has done since the day he was born.

“When my sisters and I were born as triplets, my sisters were born with multiple disabilities and a rare genetic disorder that included autism, developmental delays, and other issues,” said Richard. “It’s great to have them here today and always.”

“Richard speaks of his sisters with love and affection. I doubt that he realizes how much deeper his own empathy and compassion runs compared to even the most sophisticated teens,” said Mary King, a theology teacher at Cheverus. “His emotional intelligence and humility are striking.”

“Seeing Richard leave a friend’s athletic contest with his two sisters, hand in hand with each of them, reminds you of the kindness and compassion that exists in this world,” said Kate Coddaire, the director of college advising at Cheverus.

Richard presents the best of Cheverus so well that he is the first senior student that faculty members call upon for open house panels and presentations to the Board of Trustees.

“He is well respected and adored, frankly,” said Coddaire.

Richard is an extraordinary minister of communion at school Masses and an active parishioner at St. Peter Parish in Portland.

To Richard, leading the life he does, driven by his work ethic and love of God, just makes sense.

“My work ethic is closely related to my Catholic faith and its values,” said Richard. “My parents made a lot of sacrifices for me to attend Cheverus. Therefore, I always give it my all no matter the task. It’s easy to give up when times get tough, but it’s important to always keep fighting and working for what is right and just. This is what I will always do.”