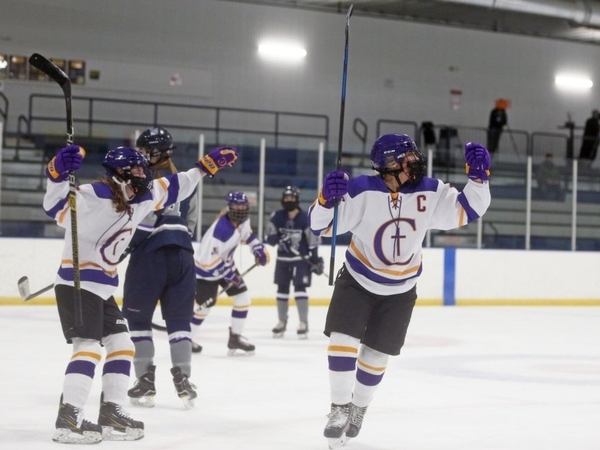 Stags get a hat trick from Lucia Pompeo and blank Portland/Deering, 4-0.

Stags hold off Falmouth, 4-1, in quarterfinals 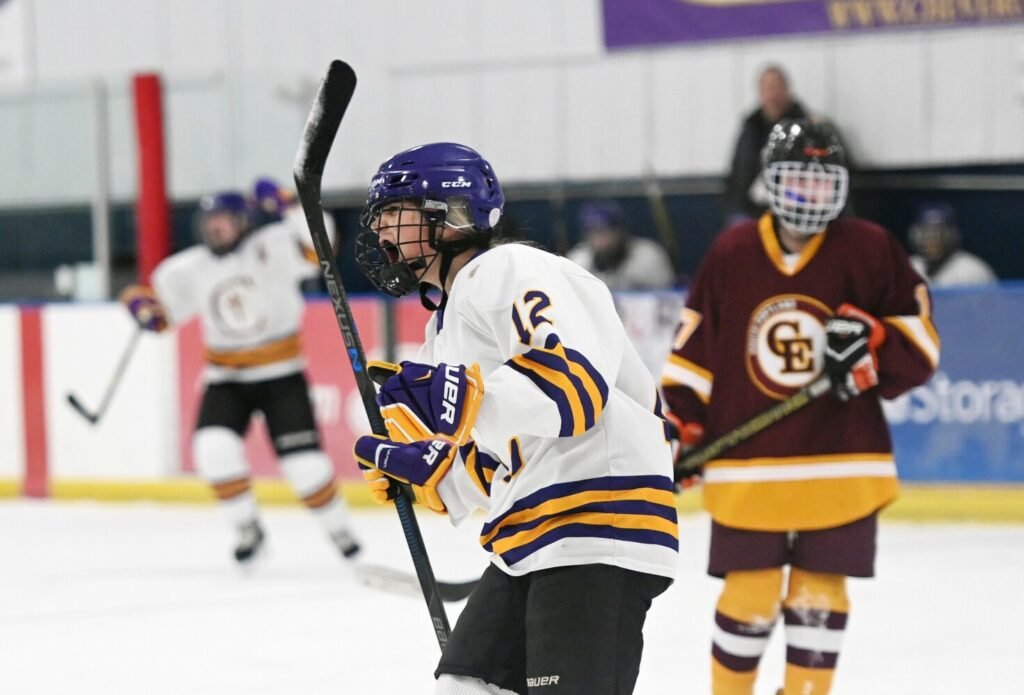 Lucia Pompeo has a hat trick for Cheverus/Old Orchard Beach in a 4-2 victory over Cape Elizabeth/South Portland/Waynflete. 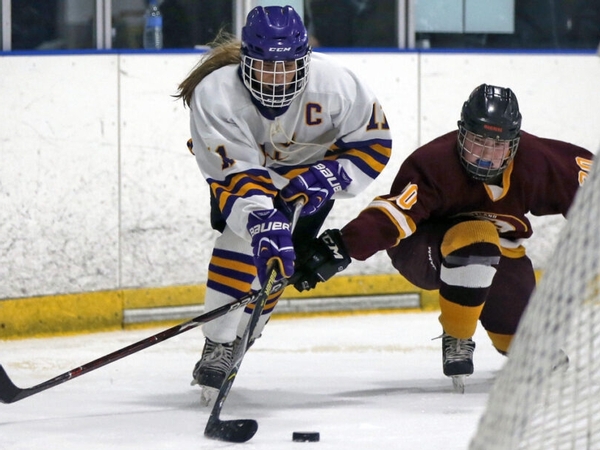 Cheverus/Kennebunk/Old Orchard Beach is pushed to the limit by Cape Elizabeth/Waynflete/South Portland but escapes with a 1-0 victory. 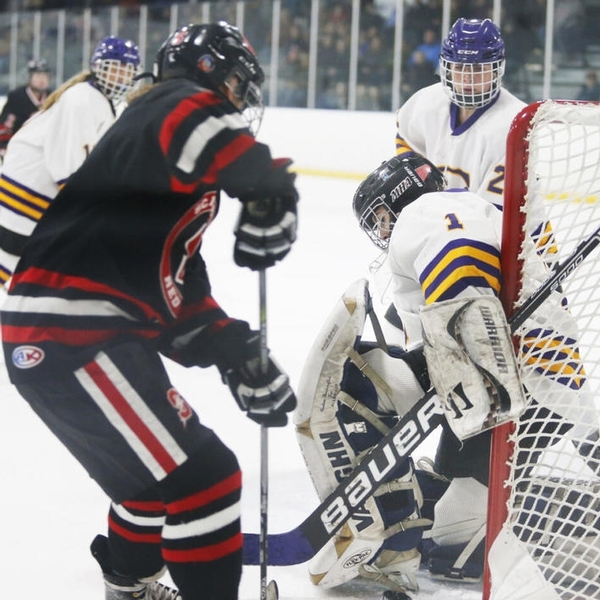 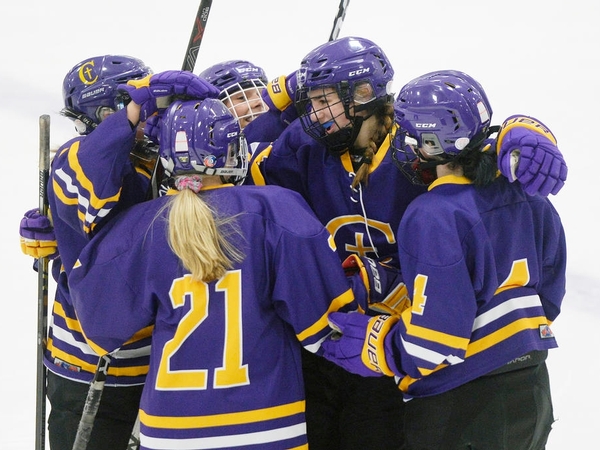 Cheverus/Kennebunk junior Abby Lamontage, second from right, is mobbed by her teammates after her late goal put her team ahead to stay in Wednesday’s 2-0 victory at Scarborough

The Stags allow a goal for only the second time in five games but post a 4-1 win over St. Dom's.

Sophia Pompeo has a goal and an assist in the Stags' 3-0 win. 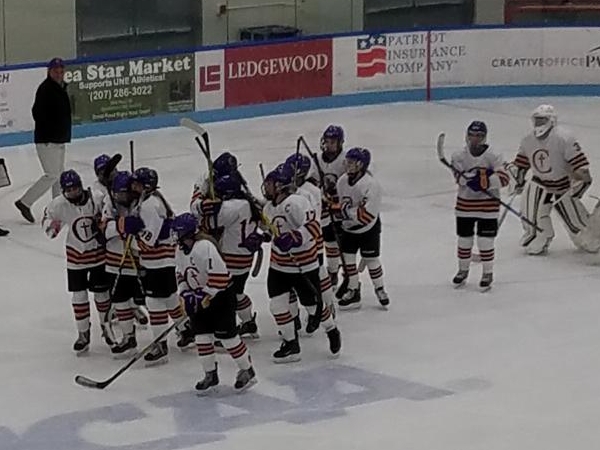 BIDDEFORD—Two cousins who have played a lot of hockey together in their young lives produced a goal which allowed the Cheverus/Kennebunk co-op girls’ hockey team to end St. Dom’s’ lengthy win streak Saturday afternoon at the Harold Alfond Forum on the campus of the University of New England.

Cheverus/Kennebunk, which lost by nine goals to the two-time champion Saints a year ago, came out strong and took a 1-0 lead midway through the first period when junior Zoe Mazur set up freshman Emma McCauley, her cousin, for a goal.

Cheverus/Kennebunk had ample opportunities to extend their advantage, but never did and while St. Dom’s had some looks of its own, Cheverus/Kennebunk controlled the puck most of the way and relied on its defense and senior goalie Anna Smith to frustrate the Saints as it went on to an inspirational 1-0 victory.

Cheverus/Kennebunk improved to 6-0 on the season, dropped St. Dom’s to 3-1 and in the process, ended the Saints’ state record, three-year win streak at 29 games.

Read the full story at The Forecaster. 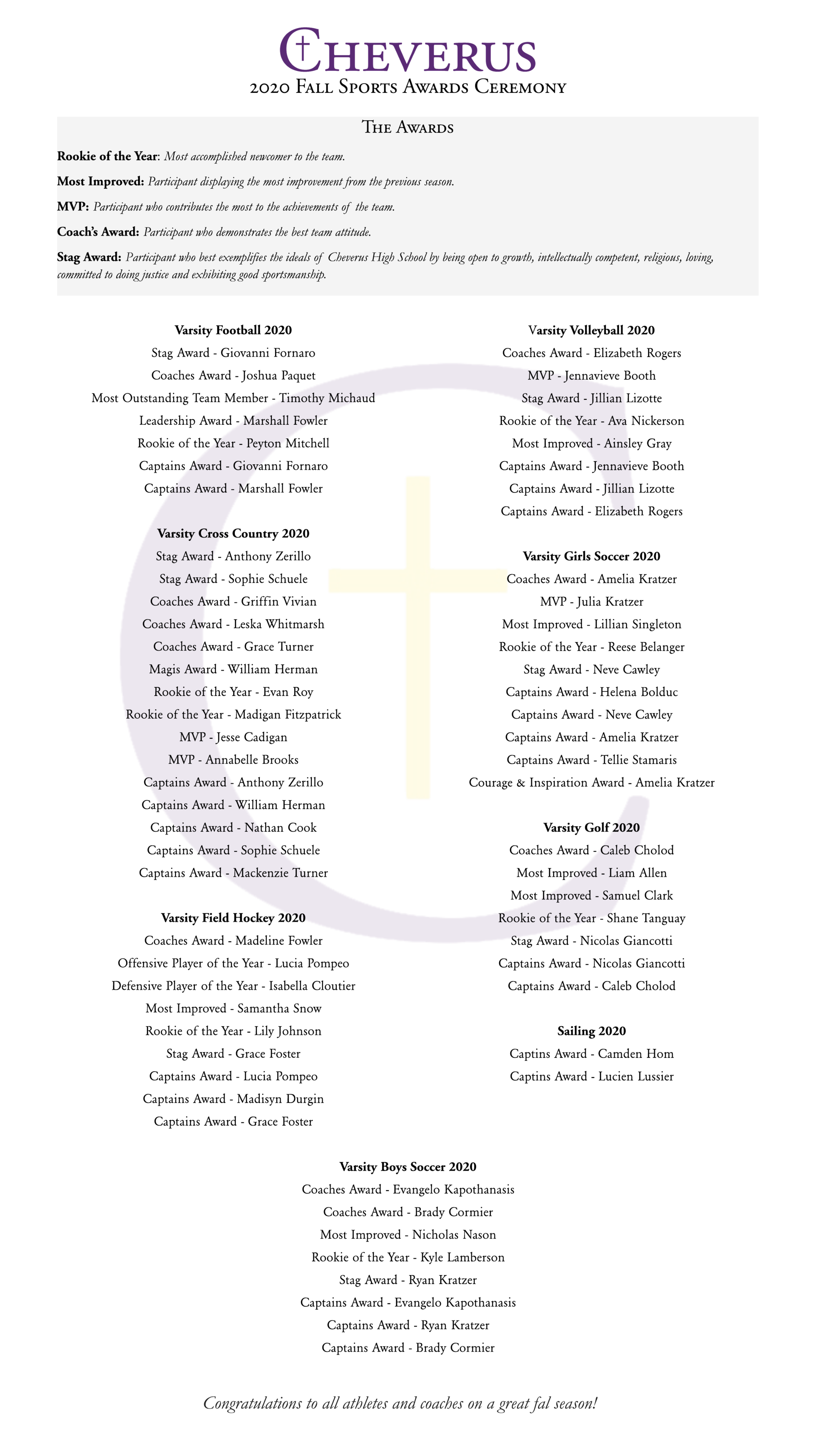 We will be LIVE STREAMING our HOME games this fall!

A reminder to our dedicated fans: in accordance with the SMAA guidelines and the Governor’s Executive Order regarding outdoor and indoor gatherings, there will be no fans allowed at games. We know this is disappointing. At Cheverus, our mission is to educate our young men and women to be people for and with others. Protecting the health and safety of our community is critical during this global pandemic - it is for the common good. We know you love to watch your student-athletes play and have created a plan for live streaming home games so we can come together as a community virtually to support our student-athletes. #gostags

Finally, we have a favor to ask: We have created a YouTube channel (link) dedicated to Cheverus Athletics. In order to live stream from YouTube, we need to have 1,000 followers. Can you click on this link and subscribe to our channel? We will be using Facebook Live in the short-term, but hope to share more video in the future and would appreciate your subscription!

On Wednesday, August 19, 2020, the Cumberland and York County superintendents voted to delay in-person interscholastic athletics to a date no sooner than Tuesday, September 8.

This date represents the official start date the MPA announced in July. We are awaiting word from the MPA on the status of the Fall Sports Season and what that may look like. SMAA schools cannot risk a further delay to the start of the school year by holding athletic programming on school grounds for two weeks prior to the start of school (MPA Phase 4 summer conditioning program). By delaying until September 8th, SMAA schools can focus on starting the school year and open schools without the fear of on campus transmission occurring through our own sports programs prior to that.

With MPA guidance due to arrive next week, SMAA schools will be able to determine next steps regarding the fall sports season with a full understanding of what the season will look like. This will allow the association and its member schools an opportunity to develop a comprehensive plan for interscholastic athletics that may have reduced or canceled interscholastic seasons. SMAA Athletic Administrators