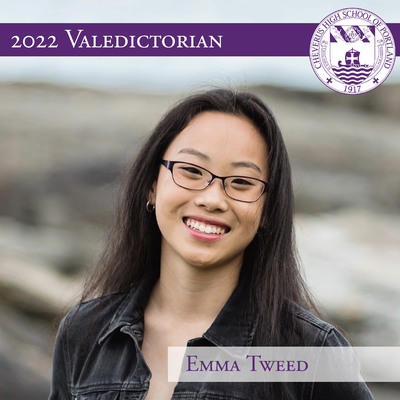 Emma Tweed has been named valedictorian of the Cheverus High School Class of 2022. She will deliver an address at graduation on Monday, June 6 at Merrill Auditorium.

While at Cheverus, Tweed was a four-year member of the Math Team and captained her senior year. She was a member of the Key Club for three years and served as treasurer her senior year. She served as an Admissions Ambassador all four years, and attended the Ignatian Family Teach-in her senior year. Tweed was inducted into the National Honor Society, was named the Undergraduate of the Year, and received the Harvard Book Prize and Phi Beta Kappa Award her junior year. She was named an AP Scholar with distinction, a National Merit Finalist, a United States Presidential Scholars Program Semifinalist, and will graduate with a STEM distinction.

Tweed is the daughter of Marie Barbieri of Brunswick. She will attend the College of the Holy Cross and plans to major in mathematics with a statistics or computer science minor. 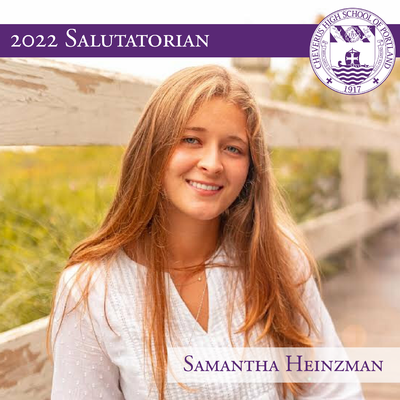 Outside of school, she is an active volunteer at her church serving in children’s ministry.

Heinzman is the daughter of Jack and Elizabeth Heinzman of Falmouth. She will attend Rensselaer Polytechnic Institute and plans to double major in nuclear and mechanical engineering. 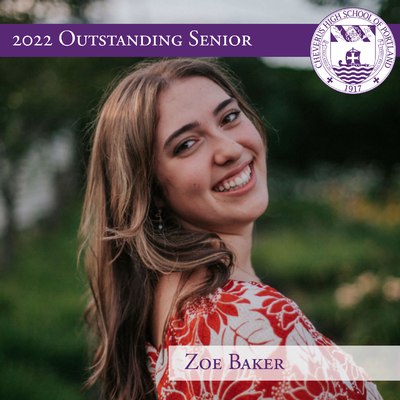 Zoe Baker has been named Outstanding Senior from the Cheverus High School Class of 2022. The Outstanding Senior and All-Around Student Award is given to the graduating senior who best exemplifies the spirit and ideals of a Cheverus student and is selected by the students, faculty, and staff. She will deliver an address at graduation on Monday, June 6 at Merrill Auditorium.

While at Cheverus, Baker was a three-year member of the Key Club and Civil Rights Club.  She served as a sophomore retreat leader and a Kairos rector. Baker sang the national anthem at various games and events for the last three years. Baker was inducted into the National Honor Society her junior year and attended the Ignatian Family Teach-in both her sophomore and senior years.

Baker was a four-year member of the volleyball team, captaining her senior year.

Baker is the daughter of Joel and Jane Baker of Portland. She will attend the University of South Carolina and plans to major in elementary education. 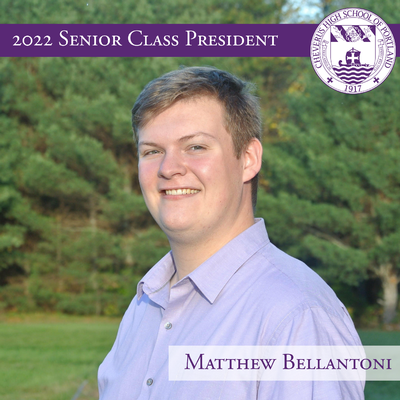 Matthew Bellantoni is the senior class president of the Cheverus High School Class of 2022 and will deliver an address at graduation on Monday, June 6 at Merrill Auditorium.

Outside of school, he is a member of the Boy Scouts, has achieved the rank of Eagle Scout, and is a member of Catholic Youth Leadership Team of Maine.

Bellantoni is the son of Charles and Deborah Bellantoni of Gorham. He will attend the Rochester Institute of Technology and plans to study mechanical engineering with a focus on aerospace.

While at Cheverus, Fowler was a four-year member of the President’s Advisory Board, Key Club, and Admissions Ambassadors. He was a founding member of Weight Room Club, two-year member of Student Government and a member of the Best Buddies Club and Environmental Action Club. He was inducted into the National Honor Society his junior year.

Fowler was a four-year member of the varsity football team, captaining both his junior and senior years. His senior year, the team was undefeated and won the 8-man State Championship, he was awarded the Howard Vandersea The Maine Chapter National Football Foundation Scholar-Athlete Award, chosen as a student-athlete for the Maine East All-Star Football game Maine Shrine Lobster Bowl Classic, and was a finalist for the Maine Sports Hall of Fame. Fowler was a four-year member of the varsity wrestling team, captained his senior year, and received numerous accolades for his performance, including the Zeb Leavitt Memorial Invitational Outstanding Wrestler Award and was a State of Maine and New England Championship competitor. He was a three-year member of the varsity lacrosse team and was captain his senior year. He played baseball his freshman year.

Outside of school, he is an active volunteer at Preble Street Resource Center and Teen Center, Patrick Dempsey Center, Boys & Girls Club of Maine, and Wreaths Across America.

Fowler is the son of Ken and Melissa Fowler of North Yarmouth. He will attend the Naval Academy Prep School before entering the U.S. Coast Guard Academy, Class of 2027, where he will major in management and wrestle for the academy.

Awards & Recognitions for the Class of 2022

Gold, silver, and bronze awards are based on each teacher’s assessment of the student who has performed best and contributed the most to the class. Graduates received their certificates during the Conferral of Diplomas. Congratulations to the students for their hard work.

Students who achieve academic distinction in one class earn a bronze award.