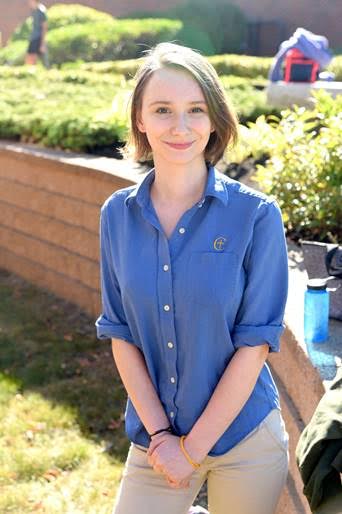 The scholarship fund, which helps Maine Catholic high school students with college tuition costs, was established in 2013 by the late Patrick Amirault, in memory of his wife. Amirault, who grew up as one of nine children in a poor family in Malden, Mass., created the fund to show his appreciation for the care and quality education he received at a Catholic school there. To be eligible for the scholarship, students must be accepted at an accredited college or university and must plan to work while attending college. Each recipient will receive $4,500.

“I know that there were many worthy candidates and to be chosen is truly an honor,” said Rachael. “I am deeply grateful for this opportunity and the kindness behind it.”

One of seven children, Rachael, appreciates the gift of family, including her second family: a community of friends and teachers at Cheverus that has given her so much.

“You can tell that people, especially the teachers, they really care for you. They will listen to you, and they will talk with you and try to help you. And it’s also present in the students, too,” said Rachael. “That’s what it means to be a Cheverian. It means to recognize interdependence and devote yourself to bettering the world around you.”

Rachael’s time at Cheverus High School has been a transformative experience.

“Cheverus is a school that emphasizes the need to care for others, which is immensely important in the formation of education in understanding its greater purpose,” said Rachael. “Cheverus has been a welcoming community, and they have taught me through love and patience and showed me that my purpose in this world is inherently connected to the people around me.”

Something that Rachael, even as a senior in high school, has already accomplished. She has donated her time to countless local charities and community initiatives. Cheverus has created in her a “desire for justice,” especially for those who are suffering. In the summer before her senior year, she went on an immersion trip to the southern border of the United States.

“The stories told in the news became more than stories. They were people with faces, personalities, and dignity,” said Rachael. “We heard stories from real immigrants about crossing over and being detained. We went to the court and heard the trials of caught migrants. We traveled through the desert in scorching Arizona temperatures, experiencing a small portion of the paths of migrants. I saw the suffering of the world not as something distant that had nothing to do with me but as a personal offense, like it was my own dignity that was being wounded.”

“It took me a while to process that being a Catholic didn’t mean you had to be physically going out and saving people. You just have to be using the gifts that God gave you to try to make the world a better place. I am particularly interested in practicing therapy, especially in working with children. I have always enjoyed working with children, and I have always had an ability to read and write,” said Rachael, who also plans to minor in English or creative writing. “I enjoy analyzing and creating characters, and I believe that these traits can be used practically to better society as best as I am able. I hope to utilize my major and my minor to produce a result that best suits my interests and the community's interests by being a steward of the gifts that I have been given.”